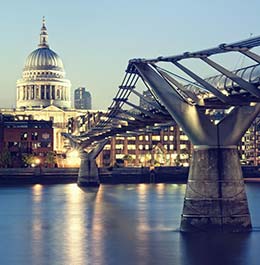 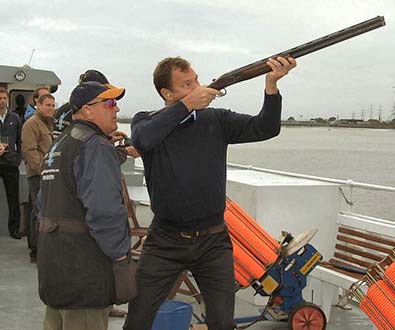 We were contacted by Ben; a newly employed graduate at an Engineering Consultancy near Luton. Ben had been charged with organising an exciting event for the company directors to entertain clients and was keen to impress with his ideas. All guests invited were based within the Home Counties so a London based event had been decided upon, however Ben was stumped as own suggestions were dismissed as 'having been done before'.

With a decent budget set, and a strong emphasis being put on the event being 'something different', we could really get our teeth into providing some exciting London event proposals. Early ideas included Urban Golf and The London Taxi Treasure Hunt, which the directors considered as options. After some discussion we narrowed ideas down to a Thames Barge Clay Pigeon Shoot. Extras arranged included a night's stay at a hotel near St Katharine Docks for the company directors and an additional prize of an inscribed iPad for the event Top Shot.

09.00 Guests wake at a luxury hotel near to the barge mooring and meet for a breakfast in a private room overlooking the River Thames.

10.00 After a short stroll guests arrive at the dock to be welcomed aboard by crew, given a guided tour of the barge, and a safety briefing.

11.00 An all-day catering menu is provided starting with a brunch of Danish pastries, bacon & egg rolls, orange juice, and coffee.

12.00 Activity starts with a showcase shoot using modern and historic weapons aiming at clay pigeons high above the Thames.

14.00 A buffet lunch is served around shoots.

15.00 Shooting continues with competition shots and scoring for Top Shot.

17.00 The day is spectacularly rounded off with the opening of Tower Bridge. An inscribed iPad is awarded to Top Shot and guests enjoy a celebratory drink in the sunset!

'The event was organised perfectly with great shooting, food, staff, and weather to boot! The instructors were hugely entertaining and I have already recommended you to a friend who is looking to do this after my stories. Thank you to everyone involved in making our client entertainment day the best yet!'

HAVE A QUESTION OR WANT TO PLAN AN EVENT? PLEASE CALL US.